Space debris has been accumulating around Earth since the dawn of the space age. As spaceflight has become more relevant for our societies infrastructure, the rate of increase of debris has grown rapidly. Currently, there are approximately 2,700 operational satellites orbiting Earth, but they are accompanied by roughly 2,850 non-operational satellites and nearly 2,000 discarded rocket stages (source: ESA). While many modern satellites intended for low and medium Earth orbits are designed to be de-orbited at the end of their service life, legacy satellites and rocket stages remain and progress towards de-orbiting them is still slow.
While larger cm-sized debris objects can be tracked from the ground using radar, lasers or special telescopes, smaller objects cannot be detected in this way. Researchers estimate the total number of space debris objects in Earth orbit having sizes between one millimetre and one centimetre across to be more than 128 million. Some of these have impact energies comparable to a rifle bullet and approximately 70% of them are thought to be in Low-Earth Orbit (LEO).

In order to safeguard the space environment around Earth in a sustainable manner for future missions, satellites and technologies, action needs to be taken now. One of the important areas that translates directly into ensuring safe spaceflight in the future and making informed decisions about space debris mitigation is to get more detailed, thorough and regular data on space debris, acquired in orbit.
At present, few in-orbit measurements of space debris are performed, and the numbers given above are predominantly derived from computer modelling. Earth-based debris detection systems tend to be complex and costly to operate. Elaborate radars are needed to track smaller objects in LEO, but even these cannot detect objects with sizes of less than a few centimetres across.

The solution to the problem of not being able to track small space debris objects from the ground is to do it in orbit. To bring that idea into reality, three partners have teamed up to fly the ADLER-1 (Austrian Debris Detection Low Earth (orbit) Reconnoiter) satellite mission – Findus Venture GmbH as a funding entity, the Austrian Space Forum (OeWF) as a national space research organisation and Spire Global Inc., a Silicon-valley based space company operating its own fleet of satellites. 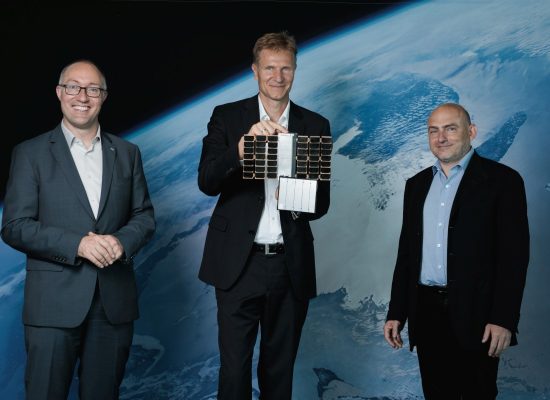 The ADLER-1 spacecraft is a 30 by 10 by 10 centimetre nanosatellite, based on the Spire ‘Low Earth Multi-Use Receiver’ (LEMUR) family of satellites. It will measure debris particles with a deployable piezoelectric array provided by the OeWF and a short-range radar provided by Spire. The Austrian Particle Impact Detector (APID) developed by OeWF is a 0.3-square-metre piezoelectric array where a particle impact produces an electrical signal that provides a measure of the impact energy. These data can be correlated with the velocity vector and location of the CubeSat.
The highly sensitive sensors can detect particles in the micro-meter size range impacting at several kilometres per second. They will also be able to detect natural sources of micrometeoroids, such as during meteor showers that recur annually when the Earth transits through the orbit of i.e old cometary dust tails.
The OeWF will deliver the payload and provide instrument support. Payload testing and integration will be conducted at Spire’s certified laboratories in Glasgow, UK. Also, the institution will coordinate the post-downlink data processing and managing the scientific analysis of the in-situ measurements. The data will be available for the scientific community for further studies.

ADLER-1 will also be equipped with a continuous-wave radar built by Spire that will have a range of approximately 100 metres for sub-millimetric particles. The reflected signal, including a frequency shift, will detect ‘near miss’ debris particles. A continuous-wave radar system is ideal for observing a large range of velocities by measuring the difference in the frequency between the transmitted and received signals.
Radar-based detection as a method of tracking space debris from orbit is an innovative concept that has so far been little explored or has only been analysed at a theoretical level. It has not yet been proven in orbit, on a large spacecraft or on a CubeSat. In-orbit radar detectors would have the benefit of being able to survey a larger area then a physical, in-situ sensor could, and do not require the large amounts of power a ground-based radar would. They are therefore an attractive concept. The ADLER-1 mission is intended to provide in-orbit validation of this technology.

Two debris detection systems on ADLER-1 are complementary. APID will detect those particles that impact it, but it can estimate the impact energy. The CW radar will ‘see’ particles that pass within a few hundred metres of the spacecraft and determine their relative velocity.

Thanks to ADLER-1 we will be able to demonstrate innovative space debris detection and in-situ data collection technologies on a nanosatellite platform. We will obtain in-situ data on (micro) space debris helping us to study the space debris environment in low-Earth orbit and verify and complement space debris models.
ALDER-1 will be launched into space in December 2021.

METIS Cyberspace Technology takes a customer-first approach to solving maritime challenges using data-driven analytics. We wanted to learn more about what they’re doing and how they got started.

Pole Star partnered with Spire to improve visibility in dangerous waters in support of search and rescue (SAR) and safety of life missions for a branch of the U.S. military.