When you think of a satellite, you may think of a very large, high-power, fridge-sized behemoth. Traditional satellites can weigh over 1,000 kg and cost hundreds of millions of dollars to launch into space and maintain.

Because of the high costs and risk involved in developing traditional satellites, researchers at Stanford and Cal Poly in the 1990s developed another, smaller type of satellite called a CubeSat (10cm x 10cm x 10cm). At the time, the goal of CubeSats was to introduce students to hands-on space experience by developing a small satellite that they could deploy in space. Since then, NASA has organized numerous student CubeSat competitions – giving them the chance to design personal CubeSats to launch into space.

CubeSats still have utility beyond educating students about satellite design more than 20 years later. They now serve diverse industrial applications in space, including government and commercial sectors, making them the future of accessible space satellite technology. CubeSats, which are often classified as nanosatellites in terms of size (1-10kg), demonstrate that satellites do not have to be huge, expensive, and high-power to be useful. They reduce barriers and risks in space and have a variety of powerful applications utilized by governments and companies alike.

One reason to use nanosatellites is that they rely on commercial off-the-shelf (COTS) parts, making them cheaper and faster to develop and launch than large traditional satellites. Shorter development times reduce overall mission costs and allow space programs to utilize smaller budgets to test and explore new technologies, payloads, and hypotheses. CubeSat missions can also provide a lower-cost option to supplement existing space data for larger, more costly satellite missions. Furthermore, CubeSats can provide enhanced mission flexibility when launched as constellations, allowing for persistent global coverage and providing high revisit rates for a fraction of the cost of typical satellites. Experts at NASA believe that space programs can often achieve around 80% of a mission’s goals at only 20% of the cost using small satellite solutions.

One of the key differentiators of CubeSat technology is schedule benefits, enabled by shortened development timelines and flexible launch requirements. CubeSats can launch as secondary payloads on numerous types of launch vehicles with various providers – letting them catch a ride to space faster than ever before. Spire Global, for example, has sent our satellites into orbit on ten different types of rockets to date – showing just how versatile the launch capabilities are for these small satellites. Further, shortening the time it takes to develop a single satellite gives companies and space programs even more flexibility with scheduling. For companies like Spire, the timeline to construct a new nanosatellite is as short as 10 days – allowing rapid launch for new, supplemental, or replacement satellites.

Miniaturized payloads are ideal for Low Earth Orbit (LEO) applications such as geospatial surveillance and weather research. While mid to high-altitude LEO orbit is generally suitable for larger traditional satellites, nanosatellites and miniaturized payloads are far better suited for low-altitude LEO environments. Proliferated LEO – the construction of large constellations of small satellites in low earth orbit – is a strategy used to create resiliency in space missions, allowing the loss of individual satellites without entirely losing the mission. At altitudes of 600km or less, CubeSat constellations face a relatively benign radiation environment, giving them increased resiliency and allowing them to stay on orbit without deteriorating for extended periods. The low altitude LEO environment is also “self-cleaning” – a term used to describe how the higher atmospheric drag pulls spacecraft closer and closer to the earth until finally, they burn up in the atmosphere. This process eliminates the need to include a propulsion device on CubeSats, further lowering development and operation costs. Finally, the closer proximity to the earth allows for improved performance of low-SWaP sensors – enabling high-resolution imaging, improved link budgets, and lower-latency communications.

The cost of traditional satellites can easily extend to hundreds of millions of dollars. CubeSats, on the other hand, are only a fraction of the cost – ranging from as low as $50k to as high as $2M. With CubeSats offering a platform for innovation and satisfying a range of commercial, research, and government purposes, companies can de-risk satellite technology and accelerate the rate we innovate space technology and its applications.

Various civilian and military applications already utilize CubeSats, and the trend is likely to continue. With the continued miniaturization of technology and devices, CubeSat space missions will include increasingly powerful payloads. To understand the progression of miniaturized payloads, we look at a specific mission set that has greatly benefitted from CubeSat technology – weather forecasting.

The miniaturization of weather observation satellites

Satellites play an essential role as observation tools in monitoring the earth’s weather and climate. Global weather data collected using satellites support scientists by supplementing land-based weather observations, giving us a more comprehensive understanding of our planet’s natural systems. However, traditional weather satellites are massive, costly, and require considerable time and resources to launch into space. Because of this, gaps in observation services are often left unfilled as planning and funding for large missions unfold. In response to the unsatisfied potential for additional observation and data collection, public and private organizations have set out to create more agile, more cost-effective satellite programs to supplement existing earth observation efforts – ultimately leading to miniaturized satellites and payload technology. Organizations can launch small satellites into space much faster and cheaper than traditional satellites, allowing teams to quickly fill gaps in current weather satellite missions and continuously upgrade capability on-orbit.

The early days of weather monitoring with GEO satellites

The Geostationary Operational Environmental Satellite Program (GOES), a collaborative effort between NASA and the NOAA, formally began in 1975 with the launch of the program’s first weather satellite – the GOES-1. Launched into GEO, GOES-1 weighed nearly 635 kg and operated in orbit for ten years. GOES satellites became increasingly heavy and costly throughout the program’s life as satellite capabilities, and payload technologies advanced. For context, the total cost of the last several GOES program missions has well-exceeded a billion-dollar threshold. The image above shows the weight progression of GOES weather mission satellites from the beginning of the program’s life. As technology and satellite payload technology advanced, so did the size and weight of the satellites.

The program launched 17 GOES satellites into orbit by 2021, with the five most recent satellites still operational. GOES-T is the next satellite planned for launch in 2022, with an expected launch weight of approximately 2,800 kg.

While the size and weight accomplishments of the COSMIC-1 constellation were undoubtedly a step in the right direction, the need for further satellite miniaturization and overall cost-reduction was evident.

In collaboration with several other space agencies and organizations, NOAA launched the COSMIC-2 constellation – building on the success of COSMIC-1. Even with the vast increase in atmospheric and ionospheric observations of the COSMIC-2 satellites, CubeSat constellations are pushing the benchmark even further. The COSMIC-2 LEO constellation collects around 6,000 ROs per day, while the Spire 3U satellite constellation has successfully collected up to 20,000 RO profiles per day. Not only do CubeSats offer the technology needed to increase observation efficiency, but they also enable persistent global coverage, including over the poles, which are not within the collection footprint of the current COSMIC constellation.

In the race to collect more advanced weather data from space, no strategy has proven more effective than reducing the costs and resources needed to launch satellites into orbit – and CubeSats are the perfect example. With less investment required to develop satellites, companies and governments can devote their money and resources to miniaturized payloads – broadly enhancing observation technology or developing technology with a more defined purpose.

Spire Global operates the world’s largest multi-purpose constellation of small satellites. The fleet currently consists of over 100+ nanosatellites, each about the size of a shoebox and weighing approximately 6 kg. The dramatic decrease in size and weight not only allows for cheaper and more standardized launch vehicle interfaces and requirements, but the cost of each satellite is orders of magnitude less than nearly all other traditional satellites. With minimal costs and launch requirements, teams can now focus their resources on developing enhanced payload technologies.

One such example of enhanced satellite technology is radio occultation (RO) payloads. Radio occultation data improve weather forecasting and climate change monitoring by creating detailed profiles of the atmosphere’s temperature, pressure, and humidity. According to the European Centre for Medium-Range Weather Forecasts, Spire’s radio occultation data was among the top five factors that reduced errors in their weather predictions. The UK Met Office also reported significant improvements in weather forecasting once they introduced Spire RO data to their network.

Spire’s constellation architecture enables global coverage, including over the poles, dramatically increasing the amount of raw, near real-time data available for weather modeling. Spire equipped the constellation with payload technology that collects over 10,000 radio occultation measurements per day and a GNSS-Reflectometry payload that gathers critical sea ice and soil moisture data. In addition to atmospheric and Earth surface information, Spire’s satellites also collect ionospheric information that feeds into space weather and space domain awareness models. With new multi-million dollar NOAA and NASA weather data contracts recently awarded to Spire Global and the aim to reach up to 100,000 radio occultations per day, Spire is on track to make groundbreaking improvements in weather prediction accuracy for organizations across the globe. 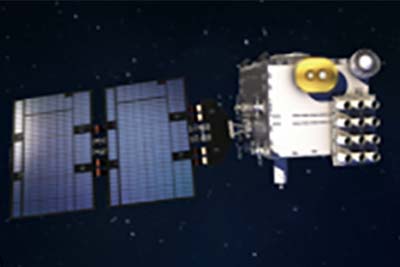 The successes of space-based weather observation and data collection have never been so significant. And we’re doing it with smaller technology than ever before – a 6kg satellite.

As the saying goes, “Sometimes, less is more.” One way for companies and governments involved in space, aviation, and other satellite-dependent industries to reduce mission cost and risk is to rethink satellite payload size. Imagine the ability to launch and deploy a constellation, at scale, at a fraction of the cost and time required to launch a larger, more exquisite payload solution. Can you miniaturize your payload to work on a smaller form factor? We can help you. The importance of global weather forecasts for U.S. Military and Civil Agency missions